In the dead of winter, January 2012, I was curled up on our couch in front of the television waiting for my husband Chris to finish saying goodnight to our two girls. He entered our living room wielding two crystal stems, and a bottle of French red. The television was turned off and Trenet’s Verlaine turned on, low in the background.  He disappeared for a moment then returned with a crusty baguette and a chunk of Ossau Iraty.  I was starting to feel like something was up.  He filled our glasses and the conversation started “I have to go to a conference in mid February.”  Not wanting to complain or look too disappointed, I lowered my eyes while my heart sank and kept silent.  Undeterred he continued, “Do you think your parents might be willing to look after the girls for a week?”   Puzzled, I glanced up at him and raised an eyebrow while swirling my red.   His face turned boyish and then asked in his best John Wayne impersonation ” So, my lady, would you like to join me in Paris for St. Valentines Day?”  My heart leapt for sheer joy. 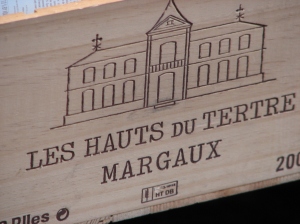 The plane began its descent and I saw it in the distance…La Tour Eiffel.  A flutter of excitement surged within me.  I grinned inwardly from pure pleasure of being able to watch a movie and read a magazine in peace on the plane, then said a quick prayer of thanksgiving to my parents for looking after our kids. Movement in the seats around me shook me out of my reverie, I pulled out my little makeup kit, demurely powdered my nose, touched up my lipstick then gently squeezed my husband’s hand.  A little thrill ran up my arm.   It was the first time in too many years to count where I would arrive at Charles de Gaulle feeling soignée instead of like a train wreck from travelling with two kids.  I smiled at my husband then pouted coquettishly,  il m’a donné un petit baiser.  The plane touched down and I was grateful. Humbly I marveled St. Valentines day in Paris, just my beloved husband and I…Is there anything more romantic in the world?

I truly fell head over heals in love with Paris on that trip back in 2012, it is without question my second city.   What is not to love?  One of the most beautiful city’s in the world, the city of lights and the city of love! While some find it difficult to pinpoint what they like best about Paris for me it is simple.  I love walking down the cobbled streets of Paris while thinking that I may be walking the same footpaths of Emile Zola, and Victor Hugo.  I often imagine that I might be sitting in the same spot sipping wine where Vincent and his brother Theo drank while having animated life discussions with Monet, Pisarro and Gaugin or perhaps dining on boudin noir where Paul Verlaine wrote some of his beautiful poetry.  I love history, I love culture and I love food.

On the ride from the airport to our little apartment overlooking Saint-Sulpice in the heart of Saint-Germain-des-Prés I thought about how best to fill some of the time I would be left entirely to my own devices.  While it was tempting to pack my days full to the brim and play tourist, I chose instead to focus on  la crème de la crème and experience only  places that my heart had longed to absorb but could not in previous trips.  I went searching for a phantom at Palais Garnier and a muse at Musée d’Orsay.

Gaston Leroux’s apocryphal work Phantom of the Opera may be a gothic tale but it is also a love story, and one that has charmed my heart since I was a young teen. Most of the haunting tale is told with Opéra de Paris (known now as Palais Garnier) as a backdrop.   There is nothing I enjoy more than a good mystery combined with a little romance.  Ghostly zephyrs of Erik, Christine Daaé and Raoul whispered in my ears and I allowed reality to slip aside.   While climbing le grand escalier to get to Box 5,  they were unfettered to tell their stories and sing ‘inside my mind’ while my eyes and heart took in the opulence of le grand foyer and the auditorium.  Being a romantic at heart it was easy to see shades of swaying couples dance in front of my eyes and hard not to imagine myself in a ball gown, long gloves, ballet slippers and mask waltzing to the ‘Music of the Night’ with my own Prince Charming. Steeped in mystery, romance and some tragedy it was everything I hoped for.  When the dream faded and reality’s harsh light shone  I was left wondering  about apocryphal. Leroux was a masterful mystery writer and an excellent journalist, there are elements of truth riddled throughout the Phantom’s tale…the lake…the chandelier…an architect bearing the same name, to name just a few.  As for me the essence of the Phantom is alive and easy to find at Opéra de Paris.

The only other place I visited on my own was Musée d’Orsay where I spent hours soaking in the impressionist and post impressionist art.  The Church at Auvers-sur-Oise and Starry Night Over the Rhone by Van Gogh and St. Peter and St. John Running by Eugène Burnand captured and still hold my imagination today.

Over the course of the week we strolled hand in hand  through Jardin de Luxembourg Parc, Tuileries and Place de la Madeleine.  We reconnected and lingered over endless cups of café crème at Cafe de Flore, and Les Deux Magots. We bowed our heads in prayer together at St. Sulpice when we celebrated Sunday Mass.  Hours were happily lost browsing the bouquinistes along the banks of the Seine for treasures and souvenirs to bring home for loved ones.

Our St. Valentines Day meal at the infamous Brasserie Lipp was the best meal of our lives.  We were happy to be seated at the front of the restaurant by the window and watched the world pass by while listening to French chanson (music hall) singers. The steak tartare with frites that I ordered was traditional, spicy and perfect for my palate.  Our wine was smooth and free-flowing.  Chris still waxes eloquent about his Pied au Porc farci avec foie gras and frites with garlicky aioli.  After our meal we meandered our way back to our apartment for dessert from Fauchon which I simply lack the skills to adequately describe…except to say that it was hands down the most delicious confection I have ever had.  A velvet exterior hid a delicious crunchy shell.   Contained within one side of the heart was a sublime chocolate mousse, while on the other side of the heart contained a red berry coulis.  Shortbread cookie, chocolate mousse, berry coulis, orchid and velvet exterior… the confection was a feast for all the senses. 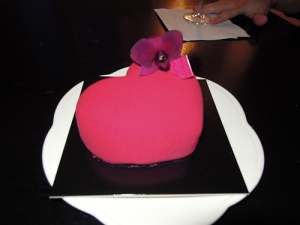 Chris and I agree that the trip to Paris in February 2012 was like catching lightning in a bottle.  Each year when St. Valentines Day comes we embrace the special day as a family and try to build off the best of our experiences into something special at home.  While Paris was not the backdrop for this years festivities, the best of what Paris has to offer was as love, laughter and light fill our family home.

We sat with our children while they enjoyed their meal and together we planned our upcoming trip to Paris in October.  Small boxes of chocolates for each of the kids and roses adorned a properly set table with perhaps the most romantic song ever written as music in the background (Je l’aime a mourir – Francis Cabrel).  When the children finished their meal and the dishes cleared away we set them up downstairs with a fire in the fireplace, popcorn and a movie. 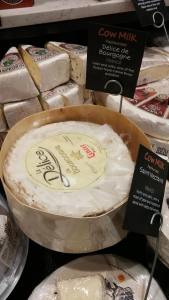 Later in the evening Chris and I worked together on our meal.  While Chris set our table, lit the candles and poured the champagne, I perfected our house recipe for steak tartare, tossed a simple green salad, and sliced up a baguette.  After dessert and the kids were in bed, it was La Vie en Rose, we opened a bottle of French red and a small wedge of our favourite French soft cheese with La Tour Eiffel and roses in the background.

1/2 tsp Tabasco sauce or to taste

Mix  yolk, lemon juice, Worcestershire, Tabasco, Dijon mustard, capers, cornichons, shallot, parsley, oil, salt and pepper in a small mixing bowl as you would to prepare a salad dressing.  Check seasoning and combine with the beef.

Place a 2.5 to 3 inch ring mold or heart shaped cookie cutter in the center of a plate and gently pack 4 to 5 tablespoons of the tartare into the mold…then gently lift of the ring mold or cookie cutter.  Repeat with three more plates and serve immediately with toasted baguette slices.