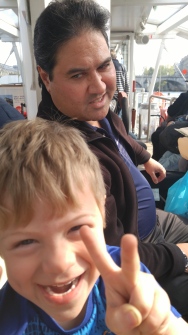 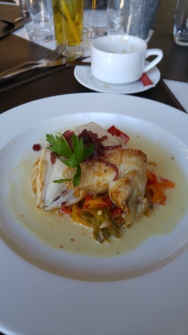 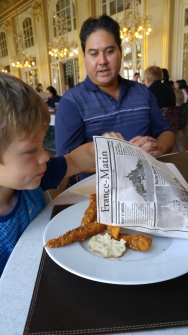 Appropriate for our last day in Paris. We have been visiting this beautiful city for nine years. Hard to believe but true. The weather this year has been the best. Paris glitters in the sun and we have had plenty of sunshine…thanks be to God.

My desire for our last day was to do whatever Chris wanted to do. I know he likes to repose with coffee in the park but instead he chose M’O in the morning and La Tour Eiffel after a boat ride in the afternoon.

I have written about Musée d’Orsay before. I will recap quickly. The museum sits on the left bank of the Seine and holds the worlds largest collection of Impressionist and Post Impressionist art. The museum itself was a railway station set in the Beaux Art style but coverted to a museum as trains became longer and its platforms could no longer service the trains.

Impressionist and Post Impressionist art is my personal favourite. Hubby knows this well and gave me my yearly fix of Van Gogh, Manet, Monet and this year Camille Claudel. I become emotional when I look at these works of art…I try to imagine what the life of the artist and muse was like.  It is easy to lose time here and losing time not worrying about consequences is a  very good thing for me.

We have never seen tourist children or teens enjoying their visits to these museums. Bored and cranky best describes their young faces especially the younger set, especially boys. Arts are important so we chose to expose our children at an early age…they had no choice. It is paying dividends with Sarah and Emily who developed a rock solid sisterly bond this trip (mother warm fuzzies alert). Sarah is becoming quite the artist and Emily excels at guitar. We set the girls loose in the museum on their own. Tête à tête off they went with a floor plan listening to music, and discussing the merits of the latest animé they are watching. As for Matt it was to the giftshop to set up a treasure hunt through the museum.

We allowed him to pick 10 postcards featuring works of art found in Orsay. He got to pick, we didn’t help. We explained early on it was a pirate treasure hunt and for every work of art he found on his cards we would take a photo of him in front of the work and he would get a small token. Turn it into a game, the children stay engaged, I fill my bucket. Matt has an affinity for Toulouse-Lautrec.

Lunch at M’O is always delicious this year was no exception. I have often thought that the kitchen at M’O should produce a cookbook. I expressed this to our waiter who has been sweet on our children especially Emily for 9 years. Emily is becoming a connaisseur of gastronomy. I can’t tell you the number of eyebrows she raises when she orders off a menu. Waiters always ask…do you know what that is? She affirms and polishes off her plate to proud appreciating looks of the waiter and her parents. Over the years she has ordered oysters on the half shell, mussels, sea bass, tartare de boeuf and tartar de salmon to name a few. Most children order chicken nuggets or a ham and butter sandwich. This waiter was so pleased with her choice of salmon and beurre blanc, he brought her a coke.

La tour Eiffel…Chris and I knew it would be ridiculous and it was. Exactly like airport security, crawling with military and police necessary, yes butl imbicilic in its set up. There was very little room to move at the entrance and the lineup snake was a Disney engineers nightmare. People hadto crowd so we all didn’t get hit by cars on the streets. On top of that the illegal vendors hawking tourist merchandise had their blankets set up outside of the gates. No room to move, crammed like sardines a pickpockets paradise. Dim-witted set up in the extreme.

We chose Tour Eiffel because it is the childrens’ swansong for Paris. They won’t be returning with us next year. Going to the summit of the tower has been on their bucketlist for years, it was important to them as Paris without the Eiffel Tower just isn’t Paris. Chris and I are happy to see her from a distance but the children are thrill seekers and want to scale its’ dizzying heights. I am a wimp with heights. We went through security and stood in line, after 40 minutes we had moved 20 feet. I became increasingly uncomfortable and did not feel safe so I pulled the plug and we left. Sarah was gutted and while I feel her pain she has something to look forward to when she is older and travels to Paris on her own.

We headed home to our apartment had dinner from la grande epicerie and packed our cases for a big travel day home tomorrow.

I should be sleeping but can’t…never do on travel day. Too stressful. My family will be up in an hour so I will enjoy these last minutes of peaceful solitude in my favourite city. My camera battery needs to recharge so I will post the treasure hunt pics Monday.

Chris and I plan to return next year without the children to celebrate our 15 yr wedding anniversary and this trip this will be my swansong. Paris is a good city to visit for children but it is first a city for lovers.

Goodnight my nearest and dearest…see you tomorrow and prezzies for all.