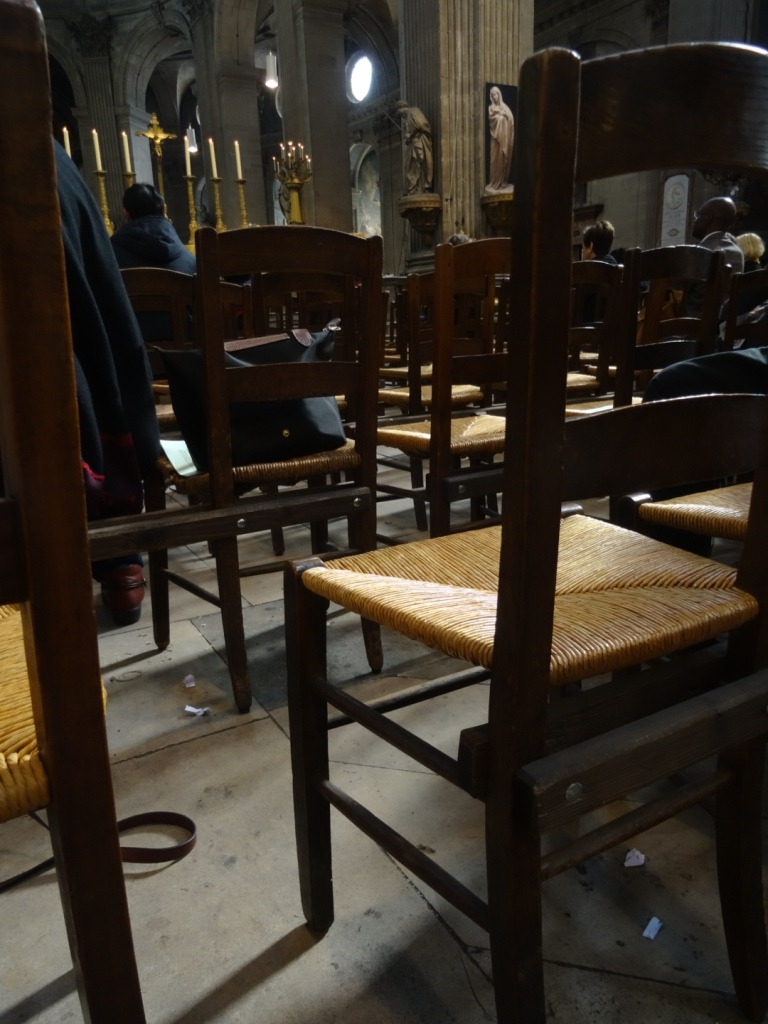 We have worshipped at many churches over the years in Paris.  Each have their own unique character and characters.  Ste Clothilde was its hospitality…after Mass cases of wine were opened and classic cheeses such as Brie de Meaux and Comte were offered to parishioners upon leaving the church…petit sablees and crisps were offered to the childrem and we all partied on the front steps and narthex of the church .    St. Severin was childrens liturgy, held in its great stone sacristy where great Persian rugs were hauled out and spread across the stone slabs so the children would not get chilled.  Then massive tubs of toys were pulled out for the children to play with.  What I found remarkable about the children was that in this parish french wasn’t always the first language, Spanish and English prevailed.  Sacre Coeur was light, bright, airy and so cheerful in contrast to the heavy stone constructs of many Paris basilicas and cathedrals.  The nuns at Sacre Coeur had the voices of angels and merriment twinkled in their eyes when small children including my own entered their parish.  My favourite of all the churches we have worshipped at is St. Sulpice and I jump at the opportunity to attend Mass here. 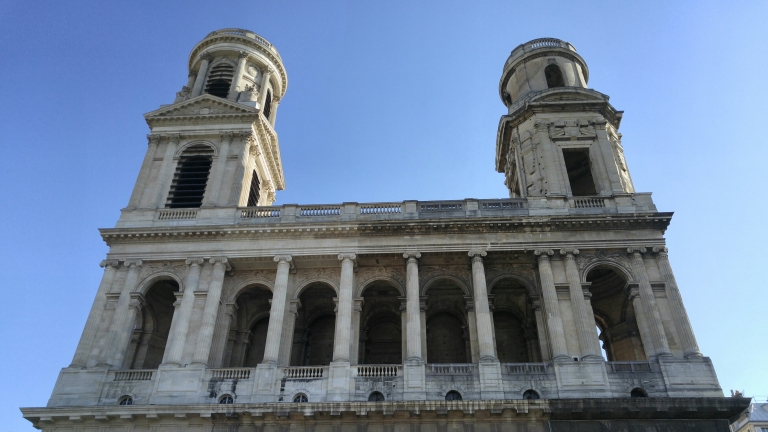 St.Sulpice is the second largest church in Paris…slightly smaller than Notre Dame.  She is an old church and roots back to the 13th century. Construction began on her present body 1646 by Jean Jacques Olier a parish priest and was completed in 1870.  She is odd to look at as her bell towers are asymmetric.

Her interior needs much restoration yet this is still my favourite church in Paris for many reasons.  Her congregation of locals is very, very small,  therefore it is quiet.  She is dependant on the visitors who actually want to worship, meaning there isn’t a constant noisy flow of tourists snapping photos during the Mass like at Notre Dame de Paris.  Their bulletin includes the order of the Mass and readings in English a definite plus but Duke Orsino said it best in Twelfth night “If music be the food of life, play on.”
The organ at Saint Sulpice is gorgeous and the acoustics of the church outstanding, it lifts its music to heaven.  In one of the opening scenes in the the movie Amadeus where Salieri describes the music of Mozart as hearing the voice of God, K361 third movement, the adagio.  That is how I felt listening to the music of J.S. Bach at St. Sulpice lifted up by Daniel Roth, resident organist.  The right music, the right instrument and the right venue equalled a beautiful, rich sound that washes over the listener and pulls them to places far away to peace.
We were pleasantly surprised to find a door of mercy set up in the interior of the church.  We are in definite need of mercy so we walked through as a family.  Grand churches such as these affect me and I was misty eyed from joy. 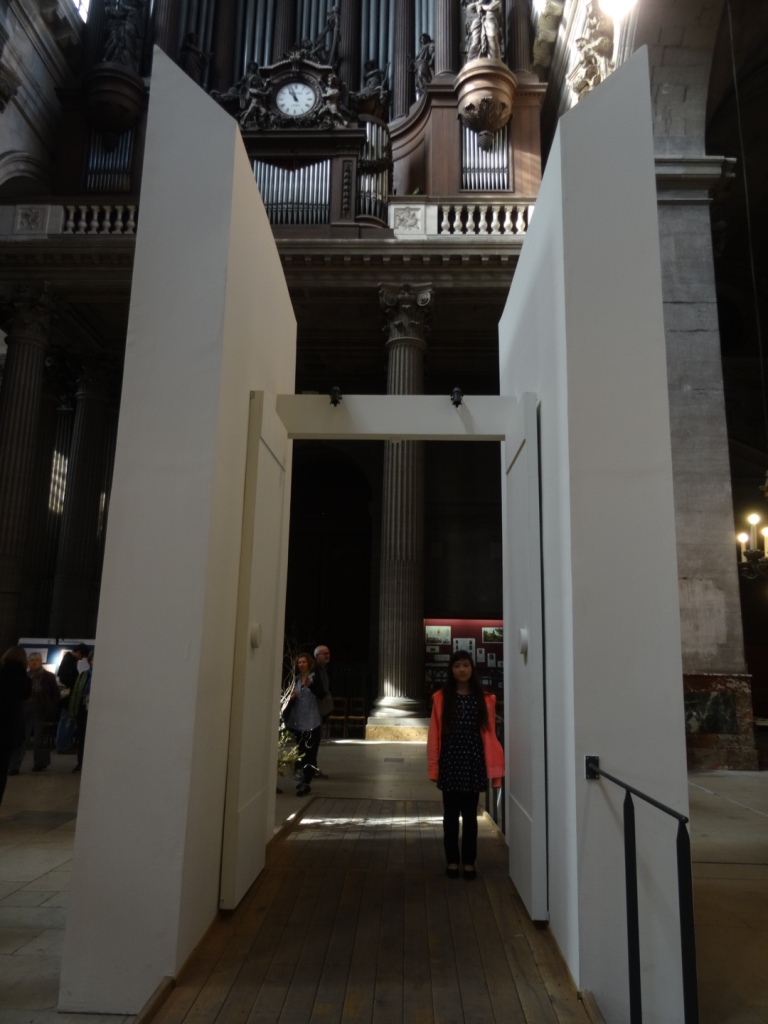 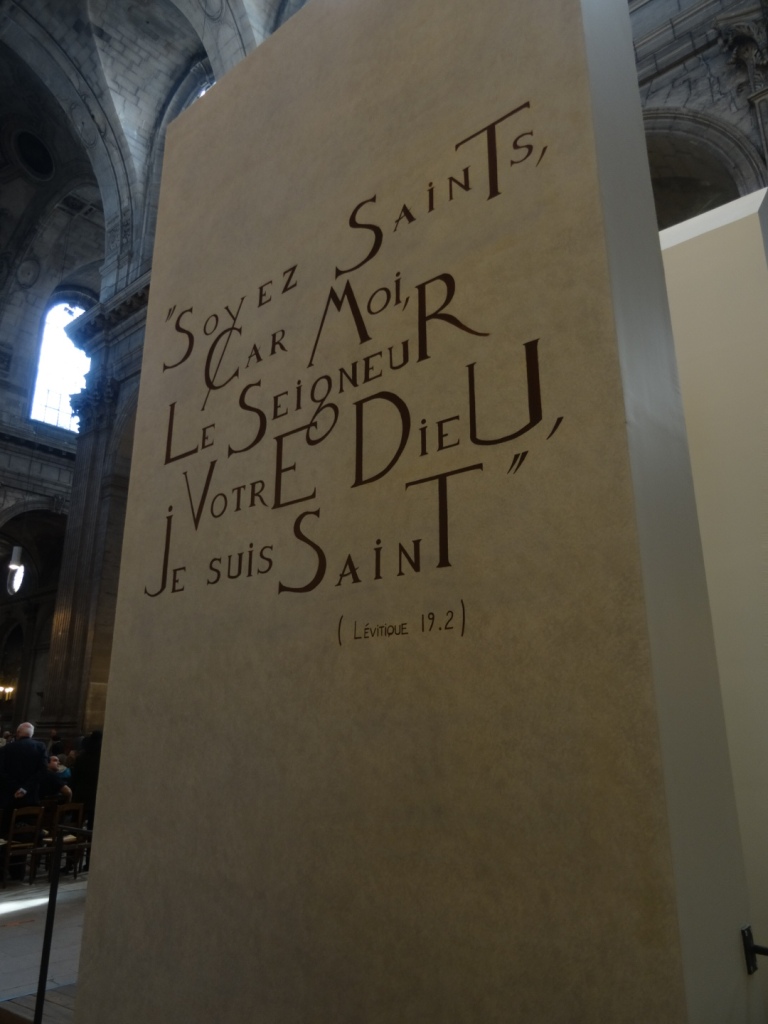 In addition to the music there are treasures of art to behold here.  The statue of Mary and the two holy water fonts were designed by Pigalle. And,  Eugene Delacroix painted two murals in the side chapels flanking each side of the church.  Jacob wrestling with the angel and Heliodorus driven from the temple. 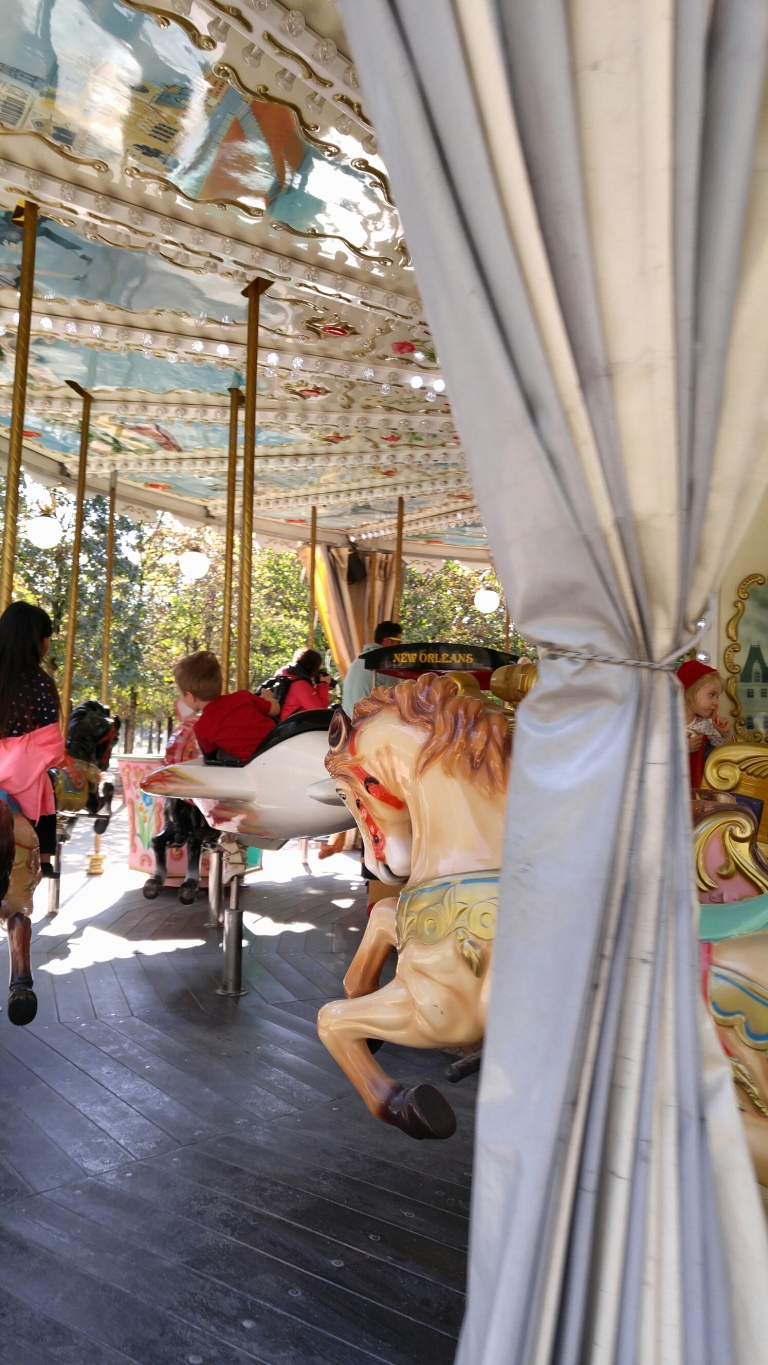 After Mass we headed to Tuileries for lunch and playtime in the park.  Sunny and relaxed, Paris sparkles in the sun.
We rounded out our day at Stohrer for dinner.  We celebrated our anniversary with boudin noir (blood sausage, best in the world…would love to know their secret.) foie gras, baguette and wine.