Matthew and I needed a break from homelife and the mundane tasks that are forever on a mom’s list.  Our school date at Billings last week left a huge impression on him and all week he has been happily chattering away about coyotes.  For the life of me, I don’t know why but he is obsessed.  So, I thought that the Museum of Nature would be an excellent place to explore all things coyote and wolf today.

As it turns out there are no coyotes in the museum and the two taxidermied wolves held no interest for him whatsoever.  For once in my life I relaxed and just let him wander to wherever he wanted to go.

Our first stop was the dinosaur exhibit. Matt is in love with dino’s, at first it was the meatasauruses like the T-Rex, Allosaurus and Albertasaurus.  But,  lately he is especially fond of vegasauruses of the duck billed variety particularly the Parasaurolophus…try saying that three times fast.

We were lucky as the museum was pretty quiet today so my mind wandered to odd places.  I kept thinking about coyotes and how best to have my effervescent, joy filled son learn about them other than from a book or a screen.  My thoughts then drifted to  poor old Wile E. Coyote and his endless pursuit of the cheeky roadrunner.  I always wondered why Chuck Jones never let the coyote catch his prey just once.  Chuck Jones had a warped sense of humour…I recall reading his biography and laughing until I was in tears and my sides hurt over his descriptions of his cat, who liked to swim and was dotty over of all things grapefruit.  Lost in my giggly reverie I came face to face with this fellow. 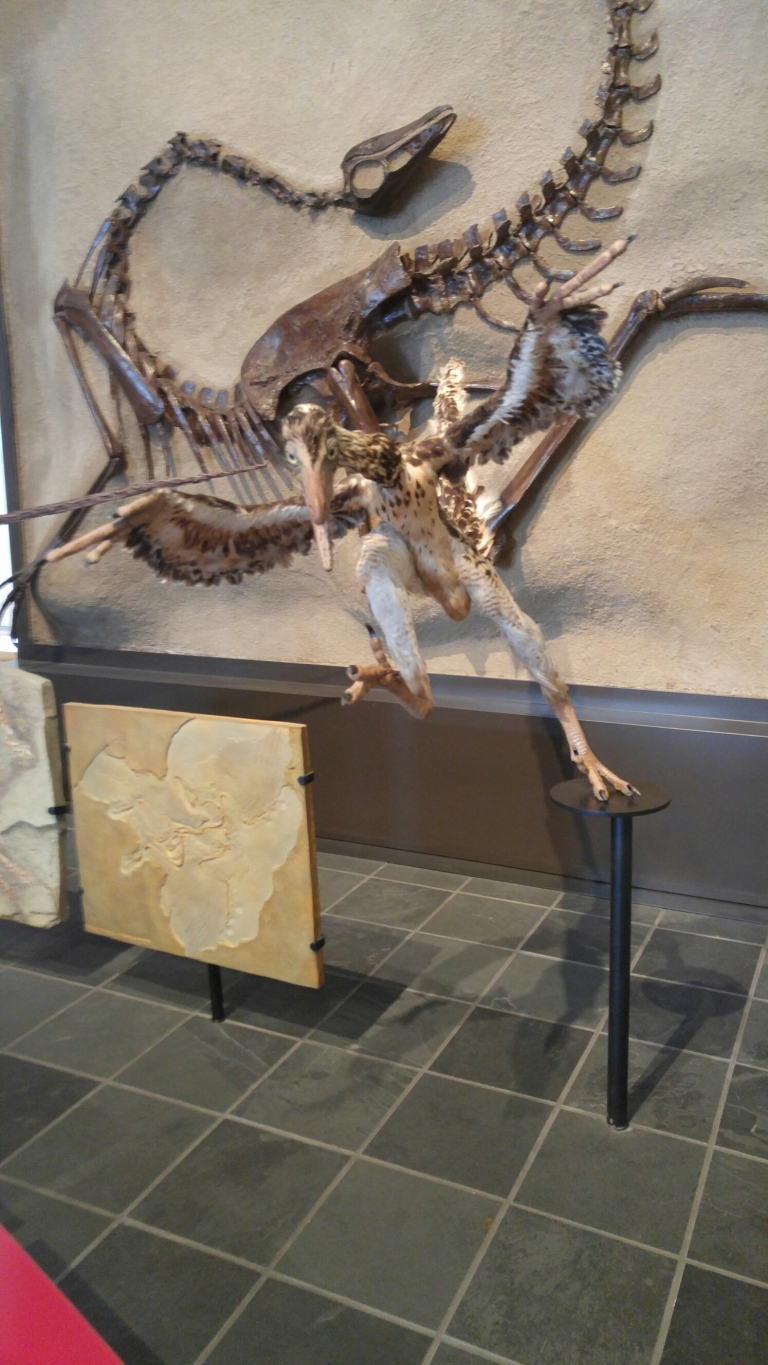 It’s an archeopteryx and I lost it because all I could think about was a Chuck Jones, Hallowe’en special where Wile chases the Roadrunner into Dr. Jekyll’s lab who drinks the viscous, bubbling, vapourish green liquid and turns in to the caricature of the above raptor.  It’s the pose, it’s cartoonish to me. 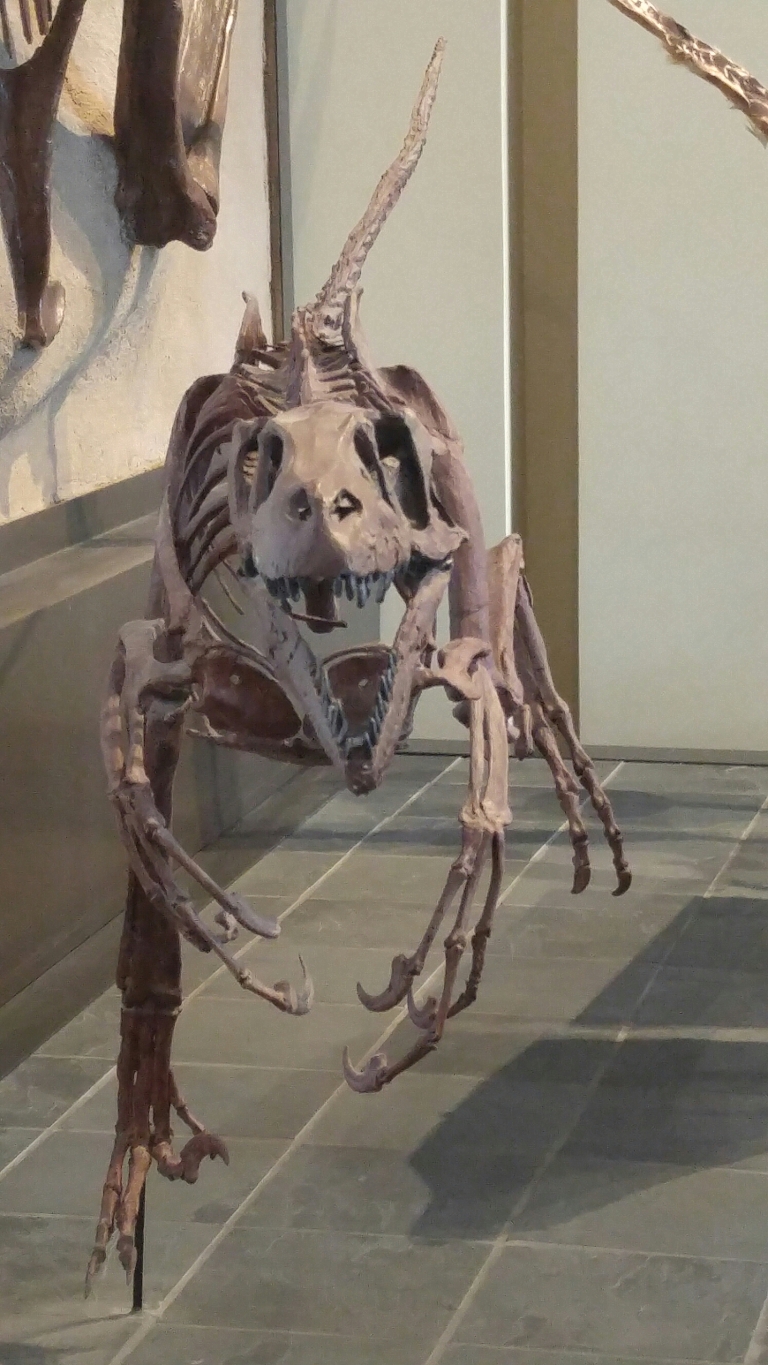 The pose this guy is holding reminds me of the T-Rex and Ben Stiller playing fetch in the flick Night at the museum.  I kinda wished my dad was with me because we share the same oddball sense of humour and when we start my mom rolls her eyes and leaves the room.  I was in a mood.

Oddly enough we have never been to the earth section of the museum which is always of interest to me.  I like rocks and minerals and Matt did as well today. Plenty of interesting volcano and earthquake exhibits with buttons and levers to poke and push to hold his interest. 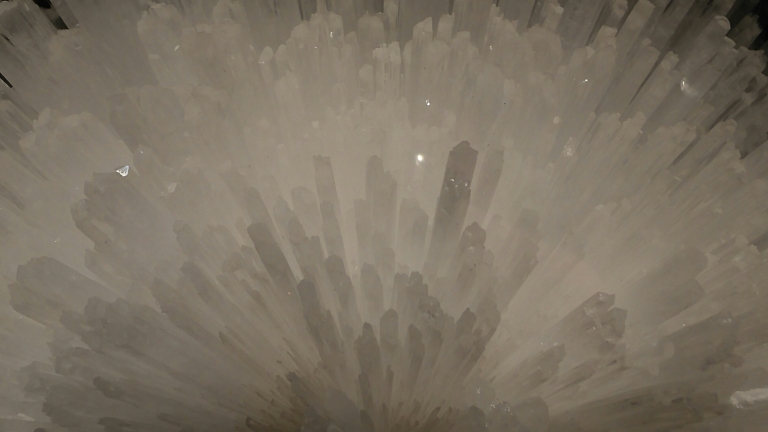 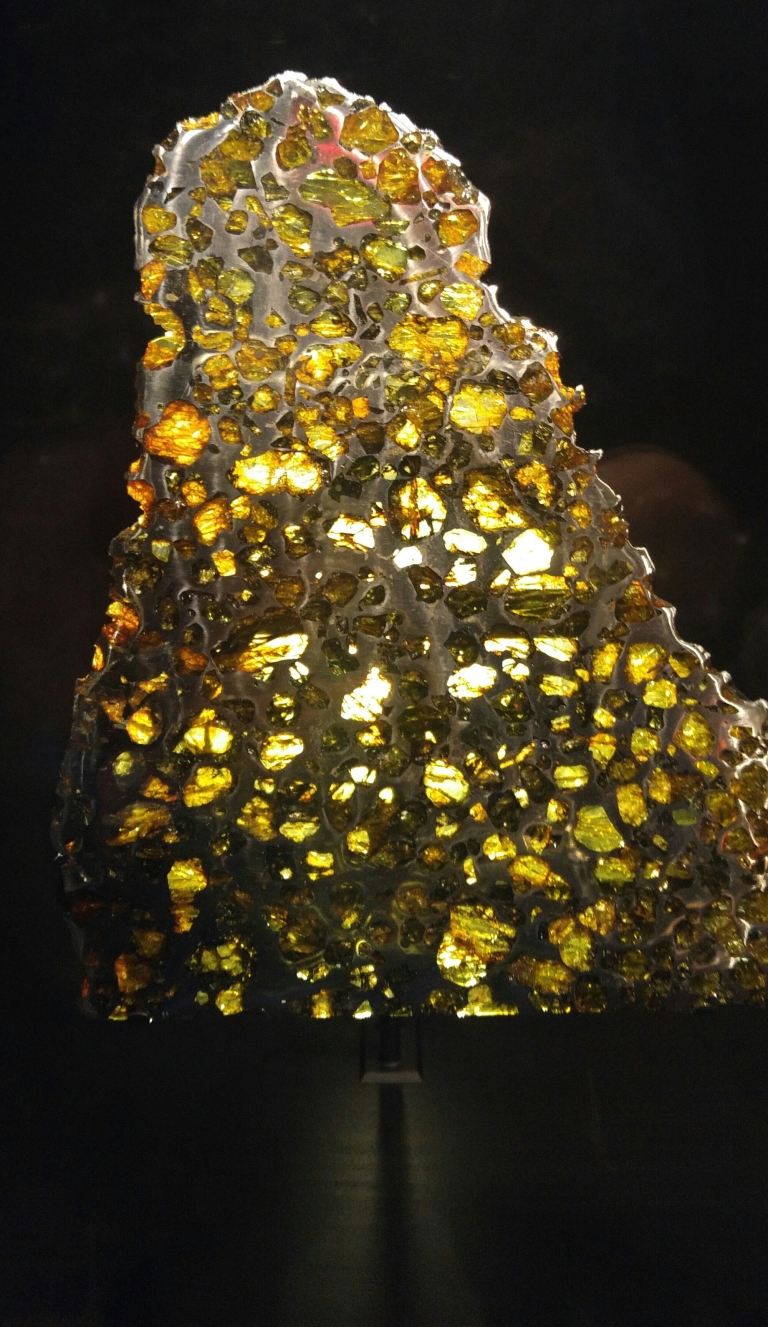 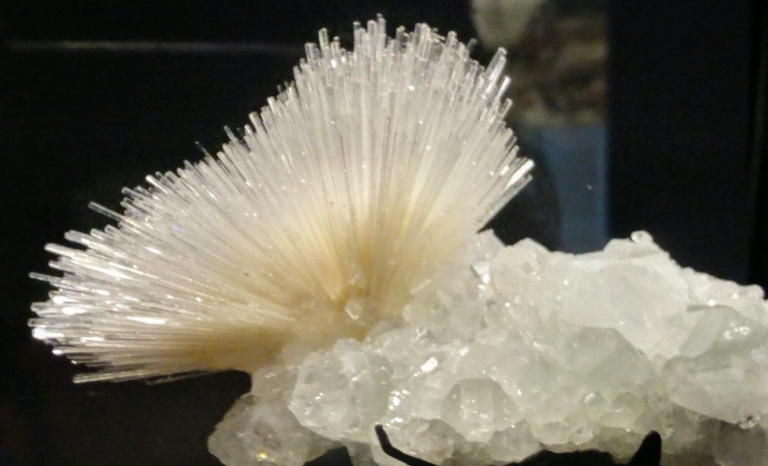 These crystalline formations truly take my breath away and the center meteorite, is simply stunning.

After a brief lunch and a visit to the gift shop we decided to visit the Reptile special exhibit.  I remember being in grade 6 and having to write a speech on a topic of my choice.  I chose snakes because at the time I was fearless and because I was a girl and not supposed to like such things, they had shock value.  I recall our neighbours calling my mom once asking if I could come over and get rid of a nest of garter snakes in their garage, which I did. In any event  I still sort of remember what I talked about…the elapidae family and specifically dendroaspis polylepsis which is the black mamba native to Ethiopia and other parts of Africa.  They are extremely venomous snakes, and dangerous because they are territorial and have been clocked at 12 km per hour. If that isn’t bad enough they have an arguable reputation for being aggressive. Because they can lift at least 40 percent of their body weight up, they will stand, display a hood and rapidly, successively strike it’s perceived predator.  Life for an adult is over in 45 minutes unless you have access of anti-venom.

My interest in snakes waned abruptly when I found myself swimming in the river with a massive water snake. It caught me off guard and I never entered fresh water lakes or rivers again.  I assumed that the special exhibit would be the taxidermied variety of reptiles, never in a million years did I expect it to be like a zoo.  The hall was dimly lit, we rounded the corner and came face to face with this guy.  He is a Gaboon viper, the largest/heaviest viper in Africa, at times reaching close to 2 m (6 ft) and 20kg  (44 lbs) and they possess the longest fangs of any venomous snake measuring around 5cm (2 inches).

My skin crawled and my body went into flight mode.  I could not wait to get out of the special exhibit.  Irrational as it seems, all I could think about was, what if one of these horrible creatures found a way out of its tank.

Lizards on the other hand I can handle and have owned.  I remember vividly my mom and dad being seriously annoyed with me because they were late for work and I was late for school on account of my Beardie (Bearded lizard) Bishop had escaped his cage.  He had crawled up the curtains in my room and was sunning himself. 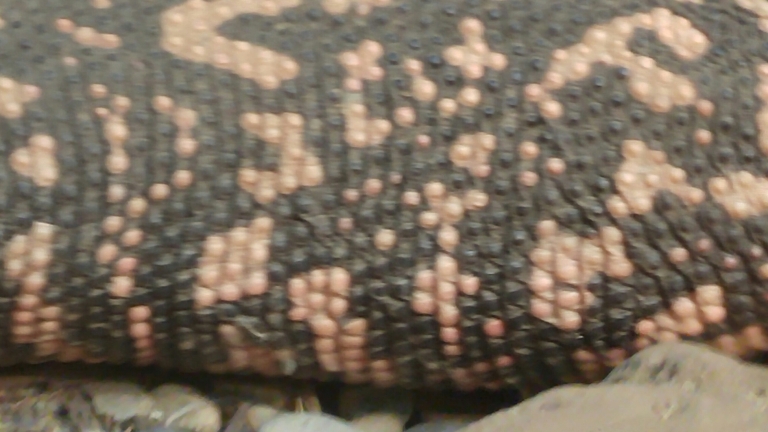 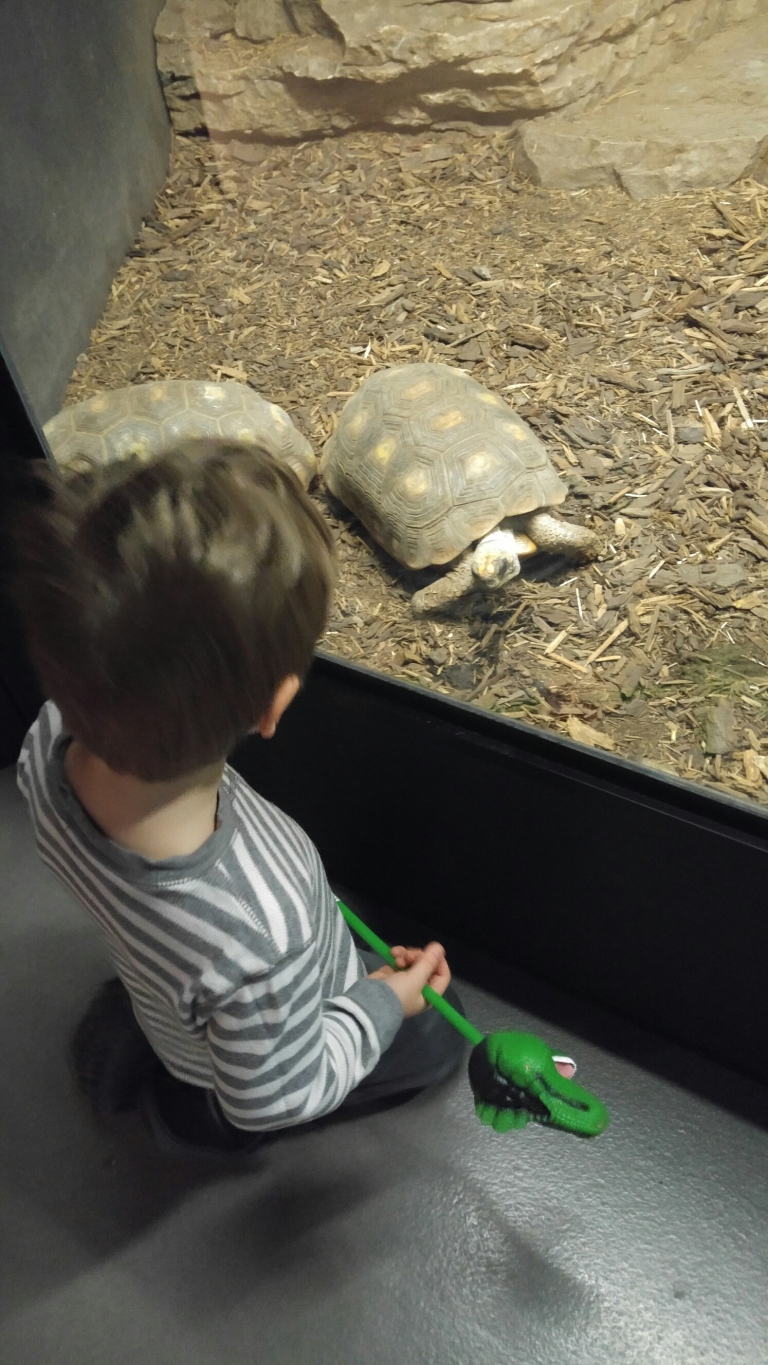 Matt liked the tortoises best of all. 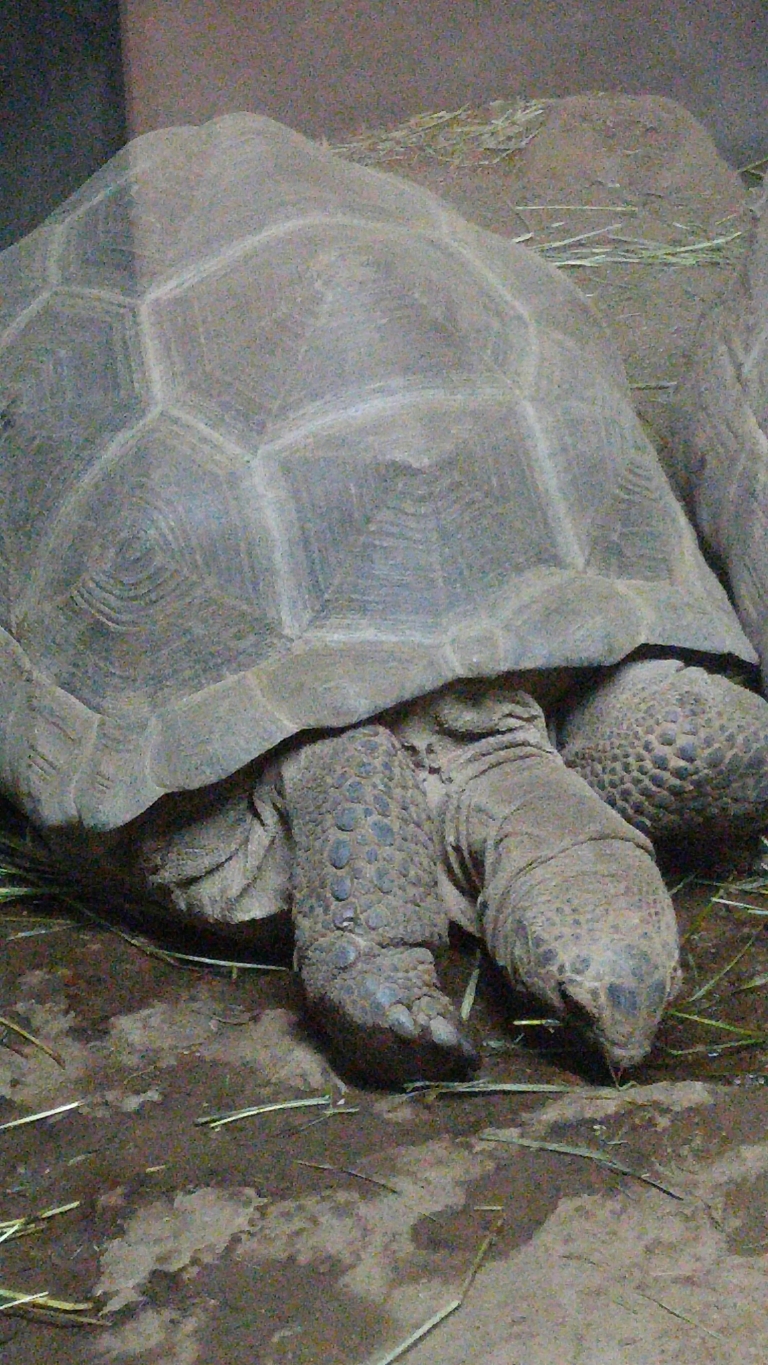 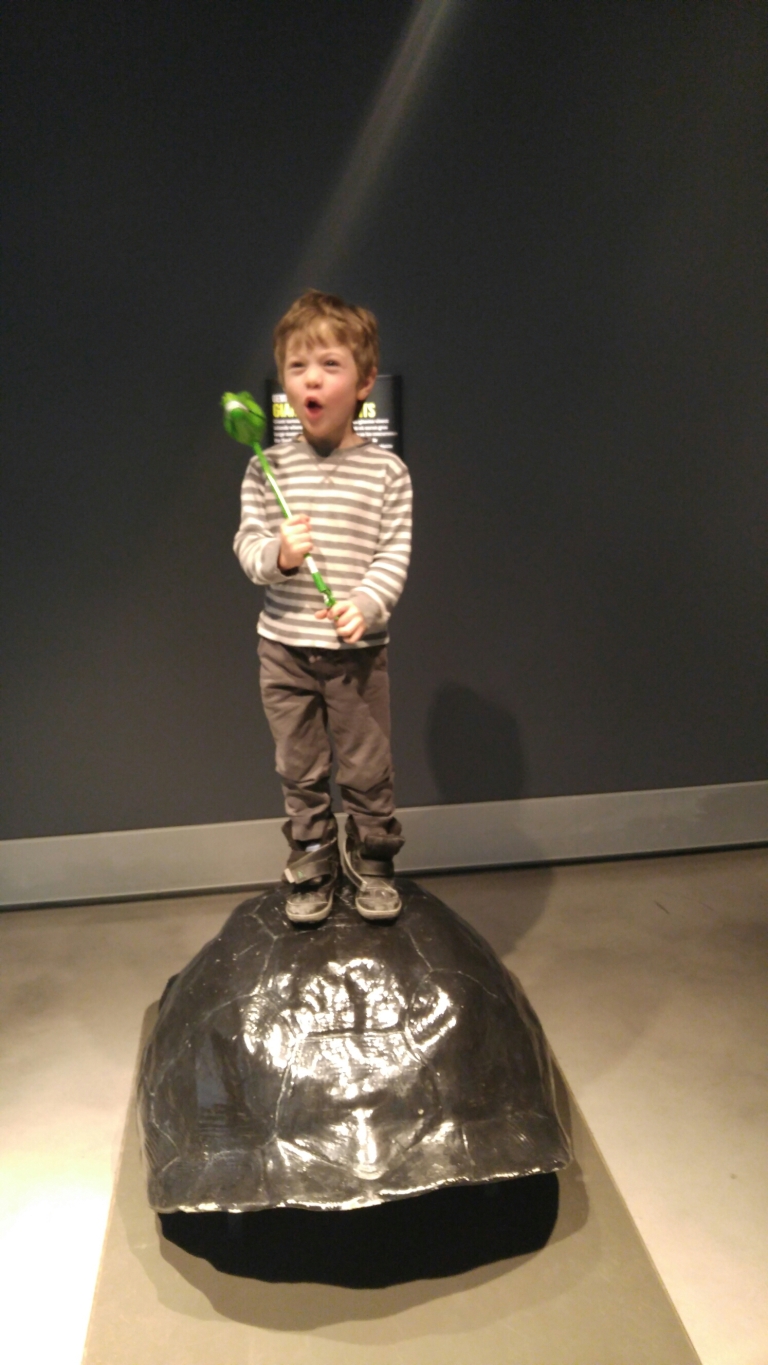 My goofy little man gave everybody a show and sang the Power Rangers song.  The snakes gave me the heebee geebee’s and I was glad to leave the exhibit.  Matt and I had a great day today.  There were no accidents and it was awesome to be able to visit a landmark without having to haul all the usual accoutrements.  It was also awesome to be able to sit in the cafeteria and not worry about having to pack a lunch.  My wee man is growing up.